Original image from A study in human nature, 1920.
Adultism
A series on the systemic discrimination of youth.

Bria Bloom (she/her) is a born and raised unschooler, and has the daily joy of parenting a self-directed learner. She channels her passion for SDE through her work as ASDE's Executive Director. Read more 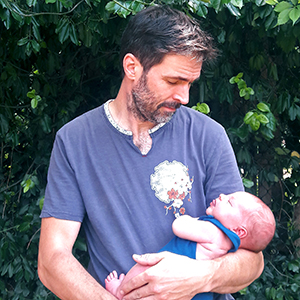 Alexander Khost (he/him) is a father and youth rights advocate. He is the Editor-in-Chief of Tipping Points and founder of Voice of the Children. Read more

“When I was young, my dad used to call [adultism] ‘age discrimination.’ He would talk to me about how unfair it was. When I used to bring it up with other adults in my life, they would laugh at me.”
–September, age 14

“I don’t want to talk to them about it. The adults here just get their way all of the time.”
–Anonymous, age 10

“That was such a ‘teen’ thing to say. So arrogant.”
–Anonymous, adult

“You make a better student than teacher. Teachers tell students what to do.”
–Anonymous, age 12

In an effort to recognize moments of discriminatory adultism, to sit in the discomfort, and to grow from it, we are calling out instances in a series of articles. We invite you to take the journey with us. The first steps are the most difficult, but once you start noticing it becomes hard to stop.

The Baby on the Bus

My friend Lyman used to run a sing-a-long class for toddlers on Sundays that my daughter Oomi would attend. One day Lyman started singing the song The Wheels on the Bus, and when he got to the verse about the baby on the bus, who in the song cries, “wah wah wah,” (and in the next verse the adults says, “shh shh shh”) Lyman stopped for a moment and said, “On my bus, I like to have the baby laugh.” And so we all sang, “The baby on the bus laughs ahh ahh ahh.” I have been singing it that way ever since.

This was a simple but profound moment that described to me so well how much our society puts children into the place of a nuisance that needs to be disciplined. If you were to substitute the word “children” with any other marginalized group, (hopefully in 2020) most people would recognize that this assumption is wrong and is a form of discrimination. And yet, our culture still accepts and perpetuates this image of minors as being troublesome, as a group that needs to be controlled and put in their place, and most importantly, as a group that should have less human rights than those of adults. It is for this reason that I insist on viewing children’s rights as the next civil rights movement.

One may notice, as I did some months back, that looking up the word “adultism” in the dictionary yields no results. Adultism is not an official word — yet. It is unrecognized by dictionaries.

Language evolves with culture and the fact that ours has not yet advanced to recognize that the word adultism even exists is a clear sign that adultism is prevalent and widely unrecognized in our society. Likely this is because it is not widely acknowledged by society as a problem. This made me wonder about various other civil rights movements, and at what point the words that define other forms of oppression were recognized by the dictionary. After diving into some research about this I noticed the expected — many of these words originated when someone noticed– and outwardly expressed– that there was a problem.

It’s time, it’s way past time, for us to notice and point out that there is a problem. It’s time to put “adultism” in the dictionary.

If we are to confront and undo our own adultism, then we have to be willing to recognize when we are perpetuating the issue.

Order in the Court

This past week, I testified in a family court hearing over a video conference call. A divorced couple with joint decision-making were in disagreement over which school was right for their twelve year old daughter. The father approached me and asked me to support his case to send his daughter to a self-directed school– the school his daughter had chosen for herself. The mother wanted her daughter to continue at the public school she was in, despite the daughter’s wishes and her reported signs of anxiety and boredom in her current school.

When I signed onto the call, the judge had me raise my right hand and swear to tell the truth. He then began asking about my qualifications and background. Quickly he stopped me, “A Self-Directed Education facilitator? I don’t know what that is.” And so, as best I could in a few sentences, I explained the basic philosophy behind SDE giving some simple examples and processes for how one might go about taking control of their own education.

When I was done, the judge said to me, “My parents chose for me the form of education I would receive, because they had the wisdom to know what was best for me– whether I liked it or not.” He continued, “Are you telling me that my parents were wrong and that even a young child should be allowed to have control over their education?”

“Yes, your honor,” I simply replied.

I was not asked much more and with the way a court hearing works, therefore, was not able to say much more. I was on the call for no more than fifteen minutes. Two more witnesses from the SDE school of the daughter’s choice also briefly took the stand. The daughter was not allowed to testify, as is customary in most family court hearings, due to her age. Less than two hours later I got an email from the father; he had lost the case. His unheard daughter had lost her case.

A judge, whose job it is to withhold decisions until completely understanding the situation ruled in favor of convention because that was what he was familiar with. With no understanding of SDE, this judge made this ruling against the very will of the human being who was going to be impacted by the choice– that twelve year old girl– because legally, that girl has no legal rights to her own desires pertaining to her own life.

“The beginning of wisdom is the suspension of judgment.”
–Judge Billings Learned Hand

“Except for the teachers – teachers are exempt from that rule because they are adults.”

I stared at the teenage person who had said this. We were in a place in which I believed that people of any age were viewed and treated equally and that instances of adultism would be rare at best. Even more surprising was that the adult to whom the teen’s comment was directed was nodding in agreement and even verbally expressing their happiness with that statement. Was I the only one seeing what was happening here? Evidently I was, as I became less convinced of my long-held assumption that a place committed to Self-Directed Education would naturally be acutely aware of adultism and its prevalence in society. I have been noticing more and more that these examples are in spaces everywhere — in the home, in the schools, from the facilitators, from the parents, from the young people themselves — the examples of adultism pile up. And it seems that no one is noticing.

In this moment, with this particular group, I chose to point out that this statement bothered me. I pointed out the adultism that fueled that phrase, and I spoke about why I disagreed with it. A single other adult in the room expressed deep agreement with me, the rest of them appeared indifferent, confused, or perhaps uncomfortable. I have decided that for myself, these instances cannot go unrecognized and unexpressed. If we are to confront and undo our own adultism, then we have to be willing to recognize when we are perpetuating the issue. We have to be willing to call out when others are perpetuating the issue. More than that, we have to be able to sit in the discomfort of the fact that we may be, that we are, the problem, and we have to be willing to grow from that discomfort instead of avoid it.

Looking around one will see it: adultism on every street corner, in every grocery store, on every playground. Day in and day out decisions are made for children in the name of their best interest without taking their interest into consideration. The accumulation of these decisions is an oppressed society of unhappy people who are unable to make their own decisions because it has been trained out of them. Adultism is a form of discrimination that impacts all of our lives, and it needs to stop. We will keep telling these stories to point out the injustices being done. The more we all can become familiar with them and point them out, the more convention will start looking more like liberated youth.