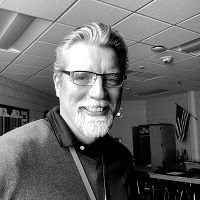 Can we deschool in school? Is it possible?

This semester, a young man named Lucian told me he wanted to learn how to make surfboards. He already had access to some raw materials and full use of a professional machine and tool shop owned by a close family friend. His interest was more than just casual curiosity. It was inspired by someone very close to him who had been unable to achieve a lifelong dream of building surfboards for a living before his untimely death. He explained all this to me, and then asked, “Could I learn how to make surfboards for my Independent Project?”

Guess how I replied?

I now have in my possession the deformed, failed attempt at a skimboard, a small beach toy that enthusiasts toss into the receding surf and jump on to ride for as far as they can along the edge of the water. Lucian was making it as prototype. He thought it was a good idea to start with the smaller skim board as practice before trying a full-size surf board. That turned out to be an excellent idea, because it didn’t work out. A chemical he used as a coating warped the foam base into a giant potato chip of bluish styrofoam. The glue curled and cured that way, but not entirely. A smell of drying fiberglass stunk up my car for days after I brought it home.

With his permission, I will keep it forever as one of my prized possessions: artifact of the power of learning through mistakes. Self-directed learning shifts our perspective on “failure,” celebrating it almost as much as any success we have in learning. What Lucian learned from the experience will never leave him. The benefits of that “failure” far outweighed the costs, and he became a little bit more comfortable with experimentation as a valid path to valuable lessons.

So can we deschool in school? Is it possible?

Based solely on the outcomes I can identify so far, the answer is a very highly qualified, “Yes.” It’s not entirely impossible, so we have to keep trying. My experience has led me to realize something else, too. To reach our goal of making Self-Directed Education as available as conventional schooling is today, we’re going to need people inside the system to push for it, too.

Lucian and many other students in The Independent Project acted on their own decisions to learn why, how, and what they wanted to learn. (See Part 3 of this series.) They used their own time to learn how to build surfboards, analyze popular TV shows, develop art portfolios, learn musical instruments, become fluent in foreign languages, create personal journals, design architectural plans, start businesses, and dip their toes into careers they were curious about. They were free to experiment, hesitate, rethink, and make mistakes and missteps without fear of getting bad grades. They were free from the anxiety and alienation that accompanies coercive teaching. They got a taste of what it means to be in control of their own education, and they wanted more. So yes, deschooling in school is possible.

But here come the qualifiers.

Public school systems would have to embrace the approach and make it available to every young person who wants try it. The only barriers to providing it as an option — starting tomorrow — are illusions and fear. Schools could start providing self-directed learning immediately. I am convinced of it.

We have to consider the broad culture and see school systems within it.

Some schools are already providing such opportunities. There are examples of taxpayer funded and private schools organized around the belief that learning happens best when the learner decides why, how, and what to learn. High Tech High in California, and Powderhouse Studios, soon to open in Somerville, MA, are examples of public schools embracing this approach. While these schools afford students more freedom and control over their learning than most, they and others like them do not yet provide fully-realized Self-Directed Education programs. The idea of trusting young people to learn naturally from living their lives the way they decide to goes against the idea of school itself, even for the most progressive schools in the country. But I suggest we should still see their efforts — project-based learning, student-centered learning, passion-driven education, or whatever other term they use — as steps toward our goal of making Self-Directed Education available in every community to every young person who wants to try it.

Also, the private, tuition-based Sudbury Valley School model has been replicated in communities all over the world where people want their children to be in control of their own education. Nonprofit organizations like the Alliance for Self-Directed Education, Ashoka, and the Liberated Learners, Inc network are working locally, nationally, and internationally to bring learner-centered, passion-driven education everywhere. Policy groups such as Education Reimagined are coming to the conclusion that providing this approach to young people is both efficient and just.

Within the system on a large scale though, a complex set of deeply embedded notions of what young people are (in)capable of, as well as policies, laws, and traditions, block access to self-directed learning. I’ve addressed only a few of these in this series of essays.

Other issues have to be addressed as well. We have to consider the broad culture and see school systems within it. As a people, we are either at a new crossroads, or maybe we’ve been doubling back to ones we thought we’d moved beyond years ago. Either way, our schools can only be as strong and healthy as our culture in general, and I suspect many agree with me that our culture is in crisis.

The world is changing, but what we need to recognize also is that it has already changed. The world my own three children—aged 14, 16, and 18—live in is very different from the one I inhabited at those ages. Disruption has become a positive force of innovation, which means that self-directed learners, who are better suited to identify and jump into challenges, will have an advantage over those who wait to be told what and how to learn. Our world will continue to change, of course, but we all need to accept that many of the things that once were simply no longer are. Few institutions in our world have been untouched by these changes, but “school” as it is conventionally conceived and experienced by millions of people has changed very little, and perhaps not at all in its most important aspects.

Conventional, coercive schooling works for a rapidly declining number of young people every year. Evidence to support this abounds: the National Student Clearinghouse Research Center has tracked an increase in college dropout rates for decades. Employment trends, tracked and reported by the likes of Forbes, CNN, Fox Business, and NPR, all make clear that millions of our highest paid technology, information systems, and manufacturing jobs go unfilled because of a dearth of qualified applicants. Studies on cheating in school all demonstrate it is on the steep increase everywhere. Andrew McCabe of Rutgers University has conducted several studies on academic cheating trends that suggest the majority of students cheat as a standard practice.

The causes and implications of any one of these factors are complex, but in my mind, when we look at all of them holistically, we must conclude that a growing number of young people are not getting what we want to believe they are getting from our systems of education. It is time we acknowledge this and start providing other educational options for any kid who wants to try them.

Inherent in Self-Directed Education is a critique of conventional schooling: acknowledge that young people have the inalienable right to pursue happiness through learning the way they want to because we know that trying to force them to learn the things we think they should doesn’t work for far too many of them. I’ve been encouraged to de-emphasize or omit this critique in my discussions about what I do. This comes from all kinds of people, those deeply committed to the current standardized system as well as from others equally committed to Self-Directed Education. Those in the system feel it is an unfair critique (it is not) and those among self-directed learners worry the critique alienates potential allies within the system.

To reach our goal of making Self-Directed Education as available as conventional schooling is today, we’re going to need people inside the system to push for it, too.

Both make good points, but if we’re confronted with the possibility that the way we educate inadvertently harms kids, we have a duty to speak up. Doctors used to bleed patients. Some people once fought against mandatory seat belts in cars. Phrenology was broadly accepted as legitimate science that claimed to measure intelligence and predict behavior based on the size and shape of the human skull (thereby providing evidence of Caucasian racial superiority), especially by educators and educational policy makers. We rejected all those ideas and accepted new, better ones. It’s time to do the same with most of our conventional notions about learning.

Coercive, standardized schooling does harm to a growing number of young people. Let’s just stop doing it. At the very least, stop doing it to kids who want to try a different way of learning. Right away. Now.

Another issue that has to be addressed is control. Adults have to realize that young people, like all people, are always in control of their own time. Instead of trying to force them to learn what we believe is important for them to learn, help them begin to consider for themselves what is important.

Guess what’s going to happen when we take that seriously?

Just the way they do now, except with a lot less of the anxiety and resentment that coercive environments foster.

The investment we make in giving them the time to figure these things out—time those of us in the movement refer to as deschooling—is well worth the results. We will help a generation of young people develop the awareness that they have power. More young people will understand that they can learn what they need to learn in order to solve the problems they want to solve in their own lives.

Isn’t that what we want for them?

I do. I don’t know where this journey will take me, but for now, while I’m still part of the system, I will continue to do everything I can do help them deschool in school. And who knows, maybe I’ll take up surfing some day, too.