Adventures in Trust: Fear vs. Reality
Comparing some of adults’ biggest fears about Self-Directed Education with what it looks like in reality, based on 10 years of working in an SDE school. 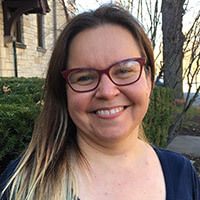 Elizabeth Lund (she/her) is a freelance writer and radical educator in the Chicago area. She works at Tallgrass Sudbury School in Riverside, IL.

When we talk about young people having freedom, many adults fear the worst. Their brains flood them with scenarios created by our culture of fear-based parenting, and having been raised with limited freedoms themselves, they have little experience with what free childhood looks like in action.

I’ve spent the last 10 years involved with Tallgrass Sudbury School, a self-directed democratic school in the Chicago area. After 10 years of working in a Self-Directed Educational (SDE) space, I’ve found that most of these fears are wildly overblown. Are there genuine struggles and real problems? Absolutely. But when you spend time around young people who are making their own decisions, you learn that most of them, like most adults, make decisions that range from excellent to pretty good. Here are four of the biggest fears I hear about kids having more freedom, and how they match up to reality.

I want to acknowledge up front that I am a white cis woman working in a school that has always been majority white, and my perception of risk will necessarily be different from those with less privilege or different sets of privileges. The decisions and experiences we have at Tallgrass are mostly (though of course not exclusively) those of white or white-passing individuals, and I know that the experiences of students and parents of color require them to approach risk differently in ways that I may not be aware of.

We’ve been taught that any child alone in a public place is in imminent danger of being snatched or harmed by a stranger. Statistics show otherwise. From 2010 to 2017, the most recent years available, the FBI reported 300-400 “stereotypical” kidnappings and stranger abduction per year of a person under age 21. The Rape, Abuse, and Incest National Network (RAINN) estimates that in 93% of cases of sexual abuse of minors, the perpetrator is someone known to the victim.

Still, the image of a child being grabbed off the street is persistent enough that most parents and schools teach “stranger danger” and set strict limits on how far children can go from adults. Others worry that their child will simply get lost or hurt.

Almost every day, students as young as eight or nine leave the building and travel a block or more away. They go to familiar destinations: stores, restaurants, parks. Most young people, like most adults, don’t wander aimlessly. If they find themselves in an unfamiliar area, our rules require them to have a working cell phone, and they all know how to use GPS or contact the school. Students are allowed to leave solo, but rarely do, almost always going with a group.

No one has ever approached any of our kids in a way that suggested an attempted kidnapping or trafficking. They do get approached by strangers sometimes, in the following ways:

The real risks to young people of being out in public are ageism, racism, and sexism. As a white woman, I can’t fully understand what those risks may feel like to parents of our students of color. But I know that those are the risks to consider (and, for some, to intentionally take up space against) when making decisions about physical freedom–not the infinitesimal chance of being snatched by a stranger in a van.

And if they are cruel, is it in their nature, or have we placed them in circumstances that foster cruelty?

Another common narrative in parenting is that we have to “force” kids to do things to keep them safe. We think children are blank slates that need our careful guidance to become anything other than lazy slobs with rampant tooth decay and scurvy. Trusting kids with bigger decisions like how to spend money or whether to hire or fire adults is inconceivable – obviously, they’d vote to get rid of all the rules, spend the school’s money on top-of-the-line gaming computers, and fire any adults they don’t like.

Having now navigated 10 months of a pandemic with our democratic school meeting, I can’t imagine that I will ever reach a point where I am tempted to overrule their decisions. Even though our students would prefer to attend school in person and, I’m sure, without social distancing, they have consistently voted in favor of safety measures and have sometimes argued for even stricter precautions than required by our state, like requiring masks outdoors. This is only the latest of many tough decisions our school meeting has handled.

The students take their responsibility seriously and understand what principles are important. An 8-year-old might not grasp the size of $10,000, but they get that we can’t spend all our money on new toys, because we also need to pay rent. Most School Meeting decisions I agree with; some I don’t, like our rules on toy guns and M-rated video games.

Let’s take toy guns as an example. When I was first involved with the school, there were no rules about toy guns, because no one brought them to school. Several years ago, a group of students started bringing Nerf guns and playing with them. This quickly resulted in people who weren’t playing getting hit with Nerf darts. School Meeting created a rule that toy guns could be used only in a particular room at particular times. The Nerf people lost interest, and again for years no one brought toy guns. Then another wave of Nerf lovers came. This time, a parent objected–a person whose family had been affected by gun violence. After discussion, we banned “manufactured” toy guns (fashioning a gun out of, say, paper was still allowed). This rule lasted a couple of years.

This fall, when school was taking place outside, the Nerf contingent spoke up again. I argued in favor of continuing the ban. Privilege was one factor I brought up–those wanting the guns were all white preteen boys, and while they may rightly assume they will be perceived as “innocent,” that perception of innocence is not usually extended to young people of other races, and as we know can end in tragedy. Families are obviously still affected by gun violence, and Nerf guns are loud, annoying, and might give passers-by a bad impression of our school. Despite my arguments and those of a few others, the motion passed, and Nerf guns are now allowed again. While I disagreed with the decision, I also think those voting in favor had reasons beyond just “we like guns.” In the socially distanced, masked, outdoor setting, Nerf guns were a replacement for tag and any number of other activities that were no longer practical. And interactive toys like this are an easy way to involve a large number of people and connect with new friends–let them use your gun, share darts, trade guns, hunt up the darts when they get lost.

These decisions and others I disagree with are usually around the edges of what is reasonable. These issues around the edges require tough decisions and allow for true engagement with each other as a community. Our School Meeting can be irreverent, heated, and sometimes dull–and it works, far better than having adults decide what they think is “best.”

When behaviors like exclusion or manipulation do happen, I think we are able to handle it better than most conventional schools.

“Kids are cruel.” Are they? Or are they blunt, or loud, or enjoy rough-housing? Are they cruel any more often than adults? And if they are cruel, is it in their nature, or have we placed them in circumstances that foster cruelty?

At our school, all rule changes go through the School Meeting, where every student and adult has an equal vote. The process of making and modifying motions usually brings us to a consensus, and everyone has a chance to be heard and weighed in before the change is voted on. We also elect students and staff to certain leadership positions, none of which have any powers that could be mistaken for the dictatorial chiefdom of Lord of the Flies. All SDE communities I’m aware of make rules or agreements about what kind of behavior is okay and not okay.

Violence is, of course, not okay, and it’s rare at our school. Kids between the ages of 5 and 8 sometimes try to solve problems by hitting. Only a few times has there been physical violence from someone over the age of 10. Those situations were treated as significant safety issues.
As for bullying, young people generally hate cruelty. Like adults, they sometimes have trouble knowing where to draw the line and what “counts” as bullying. When students have legitimate power in the form of self-determination, rights, and decision-making power, they are less likely to use bullying tactics to seize power. My experience bears this out. When you have control over your own life, you feel less need to control others.

Our students say bullying is less frequent at our school, and while I think they’re right, I’d be hesitant to claim it as a generalized truth. When behaviors like exclusion or manipulation do happen, I think we are able to handle it better than most conventional schools. Among free young people, bullying is more likely to be called out, and the community is more likely to do something about it.

Allowing children to make their own choices is not only the right thing to do, but the risks are far smaller than we’ve been led to fear.

This fear combines fears 2 and 3. We see a kid eating more candy than we want them to, and we conclude that they have no sense of self-control or self-preservation. The girl who wants to go out without a coat when it’s 40 degrees out becomes a girl who would die of frostbite if we let her. We convince ourselves that we must keep our eyes on children every moment, or they will do things that put them in imminent danger of death or serious injury.

The more time I spend around children directing their own lives, the more I learn to trust their sense of safety. By the age of 5 or so, kids usually have a good sense of what is dangerous and what isn’t. “Dangerous” isn’t the same as “risky.” Kids are made to engage in risky play and test boundaries, and that makes many adults nervous. Many kids enjoy jumping off steps or branches that for some, may be considered a little too high. They do not try to jump out of third-story windows. They might consume a pile of ramen powder, but they don’t try to outrun trains, play with live wires, or drink chemicals. Through instinct and experience, they understand the difference between something that might give them a stomach ache and something that might kill them.

My belief in children’s rights has only been strengthened the longer I work with self-directed young people. Allowing children to make their own choices is not only the right thing to do, but the risks are far smaller than we’ve been led to fear. When we step back and let children be themselves, they rise to the challenge and develop in individual ways far more interesting than the narrow possibilities presented in conventional school.

Elizabeth Lund (she/her) is a freelance writer and radical educator in the Chicago area. She works at Tallgrass Sudbury School in Riverside, IL.