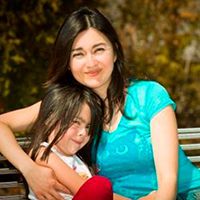 Jessica Carrasco is an unschooling mom who enjoys nurturing her daughter’s individuality.

I never forgot the way I felt the first day of school. I was six years old. At that time Junior Kindergarten or Senior Kindergarten were not parts of our educational system in Santiago, Chile–not where I used to live.

The day I was dropped at school for the first time my stomach was tight and I wanted to cry, but I didn’t. My aunt waved goodbye to me and there I was on my own, in a place I didn’t know, with people I didn’t know and who didn’t know me at all. I felt lonely, and completely unsafe.

School was a sad experience for me. I had loved drawing since I could remember, but in school I was forbidden to draw. I found a way to draw in secret anyways, until my teacher discovered me. She called my family to ask them to stop me from doing art, because it was distracting me from learning what was really important, she argued.

By Grade five I got ill for a year, so I couldn’t attend school. When I got better, my teacher decided that she didn’t want me back in that school, so I had to find another school. All schools were the same to me, a place where I couldn’t be myself, a place that made me feel anxious and scared, so by high school I found ways to skip school as much as I could.

Since I had no supervision at home, the decision was really easy—I simply didn’t go, or I went somewhere else. I loved that sort of freedom and control over my time, and I did it just enough to move to the next grade level, studying just enough to get the minimal passing marks. I just wanted to finish! But by the end of high school I wasn’t myself anymore; I got lost.

I decided to become a teacher thinking maybe I could help at least one school to treat kids better. Maybe I could help some kids in the way I wanted support in school. So I paid for my career and signed up for teacher training. Before I finished, I was offered a job as a public school art teacher and I happily and anxiously accepted it, feeling happy and anxious to start. That excitement slowed down after the first meeting I had with the teachers and principal since it was basically to let me know who the problem students were.

Once in the classroom, I saw kids trying their best not to disturb their teacher while still being kids. There was one in particular, about whom I heard a lot of stories, that got my attention. Of course, he was nothing like what I was told. I could see something familiar in him, the same sort of loneliness I felt during my school years. I found myself increasingly needing to defend this child from others’ negative judgments, yet nothing I said seemed to matter. They had already decided that this child was worthless and so they kicked him out of the school.

I was devastated. I was young and had no experience discussing anything like this with anybody; I just knew about right and wrong from my own experience in school, so I had to quit. I didn’t finish that training and didn’t go back to teaching.

I moved on to study something different and carried on with my life thinking that if I ever had a child, I would not want them to go to school. But I had no idea how I could do that since school, in my native country, is obligatory.

A few years later my husband and I moved to Canada, and, not long after, I was pregnant. I struggled from the beginning because I suspected that by four years old, she would have to go to school, thinking school was obligatory everywhere. When she was turning three, and we needed to start getting ready for the moment to come, I decided to write a short book with illustrations and planned to give it to the teacher who would be in charge of my daughter’s class. The little book was called If You Could See Her Through My Eyes. I thought this book could help others in the public school see her as a person, and not just a number. Deep inside I knew it wasn’t going to be enough. I deeply felt like I would be offering my daughter as a sacrifice to a system with which I was in total disagreement.

Later that year I met a group of breastfeeding moms and one of them, the leader of the group, was a grandmother who homeschooled her kids years ago.

What? What? Homeschooling? What the heck is that? I don’t have to send my child to school? You’ve got to be kidding! A dream come true! There was no second thought; the decision was made at that very second. I can’t adequately describe the tremendous happiness I felt inside. It’s a happiness I still feel every time I look at my daughter and know that she didn’t have to go through the experience of public school. She is an unschooled child, and she draws, runs, dances, reads, and plays as much as she needs.

I still have the book I wrote for my daughter’s teacher, and it reminds me of that experience. I am glad it’s just an anecdote to tell now, because the truth is that no matter how many books I could have written, nobody was actually going to see, care for, and love my daughter the way I do.

We chose Self-Directed Education when my husband and I realized how much we disliked being told what to do. This way seemed just the right option for all of us. We understood that we always learned better (including learning how to speak English when we moved to Canada) when we did it in our own way, so, why would we do anything different for our child?

My husband was doubtful about how our daughter would learn to read and write. His doubts became stronger as she was turning seven years old without giving us any signs of wanting to read on her own. I tried to reassure him that she was going to be fine, that she was going to learn at her own pace, but eventually, I also had doubts. She asked my husband or me to read everything for her, or just sit down with a book in her hand and do little more than look at the pictures.

One day in the morning she came to me asking me to play a game with her in which we had to read cards with very small letters in it; I didn’t have my glasses on, so I said “Sorry my love, we’ll have to choose another game, those letters are too small for me right now.” She responded, “I can read the cards for you” and she started reading as if she’d had always been reading. I was shocked, but didn’t want to make a big deal out of that, so I managed to ask her when she started reading. She said, “I don’t know.” I then asked her why she always asked her dad or me to read for her “Because I like when we read together,” she said. And that was it.

All we’d done was read for her whenever she wanted us to, and, from that, she learned how to do it on her own, without marks, without being forced or asked. Right there we knew we were doing what was best for her. After that, there have never been any more doubts about Self-Directed Education.

We’ve had the wonderful opportunity to observe how learning happens naturally, how curiosity and enthusiasm for life led a human being into investigation and discovery that we never thought possible. And we saw how a person really grows when they’re never taken away from who they are and from their needs.

Today our daughter is almost nine years old, and we feel confident knowing we are raising a whole human being. We see her enjoying the activities she chooses, and leading her learning as she pleases. And almost like an accident or a giant wave, observing her has reawakened our own enthusiasm for learning and living, for going deep, and for reconnecting with the real Self we once were; the Self we lost in the structure of the public education system.

Jessica Carrasco is an unschooling mom who enjoys nurturing her daughter’s individuality.