Photo by Samantha Levang
Life Is an Adventure
One person’s decision to direct their own education and why doing it should be the norm. 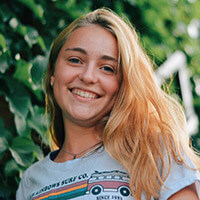 Zoe Greenhouse decided to direct her education after being unhappy with conventional school. Now she’s planning adventures and encouraging others to think outside the box.

Sixteen thousand. That’s the average number of hours kids spend at school from Pre-K through high school. Sixteen thousand hours learning things they often forget after the test. Things they may not use in the future. Things that may not interest them. They spend seven hours a day at school, then typically go home to spend three more hours doing homework. Their lives are taken up by work that means nothing to them, and they become accustomed to living that way.

I’ve experienced first-hand how many kids talk about hating school. In my sophomore year at public school, I was in the hallway with a friend and she said, “I hate this place.” This was not the only time this happened. I can’t count the number of times I’ve heard someone say something along the lines of “I hate school.”

Google’s top autocomplete propositions for “school makes me...” are sad, tired, cry, and feel dumb. The school environment is lowering kids’ motivation to learn, and no solution is on the horizon yet.

In November of 2019, Senator Kamala Harris introduced Senate Bill 2784, the Family Friendly Schools Act, to align the length of school days with the length of work days (more on that here). This would extend school days by two to three hours. “My bill provides an innovative solution that will help reduce the burden of child care on working families,” said Harris. The burden of child care on their families. This doesn’t line up. The bill seemingly implies that parents’ lives are more important than their kids’ lives.

It also shows that we don’t consider the idea that kids can learn on their own. But to me, being trusted to explore and find our own way is one of the most important elements of growing up. Trusting us to learn from our mistakes, without being told what to do. Trusting us to make good decisions, follow through, be responsible. Because of this lack of trust, many kids and teens have no room to grow in ways that are unique to them.

I was willing to spend hours and hours taking tests, writing essays, and memorizing dates — all so I could be “normal.”

I had that trust, but I wanted to go to school. I was convinced it was right for me.

See, I was homeschooled until I was 11, and I got my education by experiencing other environments and cultures. I learned to speak Spanish at age 9 in Guatemala and French at age 11 in France, where I attended an international school. It seems like this upbringing would have made me crave adventure, but at that time, it made me long for stability, four walls, a roof, and a daily routine. And friends. So I went back to my hometown, where I attended middle school.

Then came public high school in Burlington, Vermont. Not halfway through the year, I was extremely unhappy. But even though I was bored, overworked, and exhausted, I wanted to stay. Why? I wanted to fit in with kids my age. I was willing to spend hours and hours taking tests, writing essays, and memorizing dates — all so I could be “normal.” And I could see that a lot of my friends were doing the same thing.

I knew I couldn’t spend two more years there, though. I felt like I was on a conveyor belt that was shipping me through certain universally accepted stages of life in certain universally accepted ways. So I applied to a $35,000 private school. I spent weeks drafting essays to present myself to the admissions team in the best way possible. On March 9th, I got my acceptance letter — and a $30,000 scholarship.

Kids are constantly exploring from the day they’re born, but once they can’t explore what they’re interested in, they no longer want to explore.

Fast forward to June. My mom and I were having dinner at a small Thai restaurant in downtown Burlington. Here we were in this little restaurant, me with my coconut vegetable soup and my mom with her panang curry. As I looked out from my window seat onto the busy intersection, I started to think about the possibility of educating myself through real-life experiences once again. All throughout my walk home, I was deep in thought. “What kinds of art projects could I do?” I wondered aloud. Or, “What if I wrote songs?”

After that night, I became more and more confident that instead of spending seven to thirteen hours a day at school (yes, some days as a day student at that $35,000 boarding school are thirteen hours long), I wanted to get an internship, do art projects, and spend time outdoors. When Alliance for Self-Directed Education President Peter Gray talked about the unschooling movement in an interview on Boston radio station WBUR-FM in October of 2018, a particular sentence stood out to me. He said, “We send [kids] to school, and then we wonder why they’re no longer self-motivated. It is because we’ve taken away the basic motives for learning: curiosity, playfulness, sociability.” Kids are constantly exploring from the day they’re born, but once they can’t explore what they’re interested in, they no longer want to explore. It’s like trying to make a kid who loves to play with Legos play with dolls. Kids have to be in charge of their interests.

One day my mom and I were taking a hike to train for a 200-mile long summer adventure on the Appalachian Trail. As a joke, I suggested I run the Appalachian Trail. My mom asked tentatively if I’d be interested in the idea of thru-hiking the Pacific Crest Trail on my own. Before she could even finish her sentence, the word yes was out of my mouth. Yes, I want to solo thru-hike the 2,650-mile Pacific Crest Trail — and be among the youngest to complete it.

After five years of conforming to the norm, I had finally come to the realization that my longing to fit into society was holding me back from living my potential.

Life is an adventure. It’s meant to be spent doing things that make us excited to live every day and give us room to explore ourselves. I want to do things that inspire me to push myself further and go on adventure after adventure, sharing my experiences along the way. That’s why, sometime last summer, I let my spot at The Putney School go. I was beginning to see that school wasn’t what was in store for me. After five years of conforming to the norm, I had finally come to the realization that my longing to fit into society was holding me back from living my potential. I have big ambitions that can’t be fulfilled within such a confining structure, and the only thing that was stopping me from accessing a range of wonderful opportunities was my idea that I should be like other people. So I let go of that.

Zoe Greenhouse decided to direct her education after being unhappy with conventional school. Now she’s planning adventures and encouraging others to think outside the box.