Not-Back-to-School Survival Thriving
End of summer may highlight the social nonconformity of living without school, but it can also be a time for celebrating the family’s moves toward what actually works, and witnessing thriving! 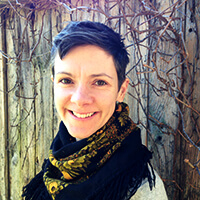 Katie Lane-Karnas is unschooling in central Vermont with her husband and two surviving daughters.

August into September is a bit of a landmine for unschoolers. It seems every time we go out, an adult asks the kids what grade they are going into or if they are ready for school, in a tone of voice that conveys they have just won the lottery. Interactions at this time of year seem to inevitably include a school-focus, which can become tiresome, awkward, or annoying. Back to school signs, sales promotions, show themes, and radio ads announce the apparently pervasive theme of the season. For schooled parents, the turn of seasons can rustle up deep-seated childhood body-memories of hope, potential, trepidation, and disillusionment. One thing’s for sure: if you’re not sending your kid back to school, you are feeling the reality of going against the mainstream.

End of summer may highlight the social nonconformity of living without school, but it can also be a time for celebrating the family’s moves toward what actually works, and witnessing thriving!

Our first year homeschooling, I panicked a bit the first week all the kids went back to school. A veteran unschooler friend gave terrific advice: just drive out of town for a few days. We drove to Grandpa’s house a few states away and spent a week playing in the yard, riding bikes, visiting the lake, and looking for rocks. It was sweet to be enjoying time with Grandpa and exciting to explore somewhere different. Just as my friend had promised, by the time we returned home, the new and shiny gleam had worn off of the school year. The kids who went back were already back in the grind, the same old issues had arisen, and I’d made it through my fear of doing something different.

Go Back to School Shopping

When my kids were 6 and 8 years old, they began talking for the first time about going to school. Many questions and conversations later, it became evident that they saw some exciting back to school shopping on Youtube, and were impressed with the back to school sales promised on radio ads. Both of them planned to enroll in school so they could get a backpack and cool accessories. We made plans to have a “back to school shopping day” just like the school kids, and they were thrilled. In the end, they were horrified to learn that schools provide lists of what the kids must get, and lists of accessories that are banned. They each used their money to buy what suited them and decided that going to school is not a prerequisite for purchasing office supplies.

They each used their money to buy what suited them and decided that going to school is not a prerequisite for purchasing office supplies.

Be Real About Propaganda Toward Kids

Kids come into the world designed to learn about the culture they live in and how to best make it in that world. It does not escape homeschooled kids that there are some themes widely broadcast to preschool and young children: “School is Fun!” “School is where you make FRIENDS!” “Kids LOVE school!” “School is where you LEARN things!” If a child has been to school for a few years, they may even have internalized these messages from parents, contrary to their own nuanced experience. This can be a situation for promoting honesty and helping recognize these messages as created by adults to influence children, for the end result of adult convenience. Pointing out that there is no one place where humans learn all the things, or that friendship is not actually limited by age or a building, may reveal these pronouncements as just slogans and not universal truth. Kids who are living outside of the system easily pick up on the pervasive messages of a schooled society and it’s okay if they have opinions about this. After all, thinking for oneself, having ongoing discussions within supportive relationships, and questioning the status quo are all major strengths of unschooling.

The kids are all back in school and the museums are EMPTY! Take advantage of beautiful late summer days and head to museums, historic sites, nature centers, parks, beaches, and bike paths. Feel the world as your oyster and see your kids loving life and learning much in a long day at a favorite museum. Soak in seeing them wild and free on the beach instead of inside the same classroom all week.

Set Up Supports for Deschooling

Not-back-to-school may be an optimal time for identifying some ways to soothe your nervous system. A list of a few techniques to do while driving, at the park, or playing with the kids can be resourced and evolved over time: EFT (“tapping”), supplements recommended by your naturopath, herbal allies, mindfulness breathing, being in nature, increasing times of “mutual fulfillment,” putting on music, or quieting things down with your ear protectors. When fear or worry pops up (maybe it’s about not sending them to school, or taking steps from homeschooling to unschooling, or triggers from your own back to school anxiety), identify it as your own issue and not a sign that you need to change your child. Find support in another homeschooling parent, a therapist or coach, time in solitude, or online homeschooling groups. Pop in earbuds and get fueled up by one of the many awesome podcasts covering deschooling. Remind yourself that as you help your nervous system learn new responses to this time of year, you are creating new pathways for peace.

Katie Lane-Karnas is unschooling in central Vermont with her husband and two surviving daughters.