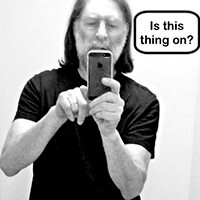 Gary Bloom is a parent of two grown unschoolers. He is a semi-retired marriage counselor, writer, and home-roasting coffee fanatic.

Starting from the distinct manner in which our son and daughter came down their mother’s birth canal — our son, Adam, in a casual stroll, our daughter, Bria1, in don’t start the next event without me! — they’ve had contrasting approaches to life. Adam is patient, and has let life come to him. Bria, on the other hand, considers the progression of time a personal affront. She seems to wish she could live life in the manner of Merlyn and Benjamin Button, backwards, so she can know how everything is going to turn out before it happens.

Perhaps it was his very patience that allowed Adam to learn to read at an age younger than his sister. It’s easier to experience the environment when you’re not in a hurry. He learned to read by having one of his Calvin and Hobbes books read to him daily for two years. One day (and why that day), when he was six, he grabbed one of the Calvin and Hobbes books and read it through. He realized that he had been recognizing most of the words for some time.

Any doubt that he had truly learned to read, rather than memorize the pages, was squashed when he next turned his new-found skill to Jurassic Park.

If we had just our first-born, I would have written the decisive book on learning to read: Learning to Read the Calvin and Hobbes WayTM. It would have covered, with lots of filler and a large typeface (a cheat learned in conventional school, when required to turn in X number of pages), two or three pages.

As Adam was approaching eight, I thought he might enjoy the fantasy-based game, Dungeons & Dragons (D&D). I didn’t know much about the game, but from what I did know, it was the sort of game I would have enjoyed (if it had existed) when I was young. When I went to the hobby store, however, I discovered another world of fantasy games. I settled on Warhammer, “a tabletop war game of fantasy battles.” The Warhammer box included an instruction manual of combat, and unlike D&D, dozens of plastic toy soldiers. I reasoned, even if he didn’t like the game, he could play with the plastic soldiers.

On his eighth birthday, we presented Adam with the box stuffed with Warhammer goodies. His challenge in reading comprehension, and my subsequent new theory, began when I opened the manual. Hmm, I once read that even quick memos, let alone formal texts, turned out by the English were beautifully written. The writer of this manual was determined to put that cliché to rest. Good for him, I thought, let prejudices die — but not at my expense. I told Adam that he would have to figure out how to play Warhammer. And he did. Motivation will do that. Hence: Learning Outstanding Reading Comprehension, the Warhammer Manual Way.

When we began homeschooling, aside from a few books by John Holt and A.S. Neil, there was neither a community of “unschoolers” nor theory-based support for unstructured home learning. We made it up as we went along. My only guide was Holt’s advice (paraphrased): When your children turn five, just keep doing what you have been doing. But as I would learn, that’s sufficient strategy but not always sufficient tactics.

When she was around seven, as stated above, Bria was not in the least willing to let life (or in this case reading) come to her. She made it clear that it was time I delivered a solution. My theory with Adam, read to your children, they would learn to read, wasn’t going to cut it. Her impatience meant that I would need a second theory. I was at a loss. The Calvin and Hobbes and Warhammer approaches were cases of accidental success. I never had to devise a learning support approach. In fact, when it came to homeschooling, my approach was nothing more than learning without school. Suddenly, I needed one of them there plans.

I looked hither and yon for a plan. (“Hither” was the library and “yon” was the Web.) I even bought a book that promised that my child will learn to read in “100 Easy Lessons” and investigated software that claimed far more. But the books and software taught with fauniques and I’ve always disliked phonicks. While many educators and parents swear by fawnixs, I have never liked any approach to learning that is context free, because it is hard to not come to detest anything learned by rote. In addition, I regarded learning to read of lesser importance than learning to like to read.

My apprehension, obviously, was getting to me. Uncharacteristically, I even asked for advice. I talked with Bria’s American Sign Language Teacher at Cyberschool (our homeschooling resource center), who was also an expert on visual learning.2 She confirmed what I hoped to hear, that phonics wasn’t right for Bria. I felt relieved to not stumble down that path.

By this time, most of you are (or should be) wondering: For Pete’s sake, why didn’t you just find some age-level appropriate books that aren’t phonics-based and have her read with you? Because it didn’t occur to me. At the time, nothing approximating the conventional school approach occurred to me.

Eventually, the obvious became obvious. We decided that Bria would read to me, daily — except, I hadn’t a clue as to which books to use. I wouldn’t choose the books used in schools, because they’re chosen by committees for whom their only virtue is their lack of offense to any interest group. Conveniently, a new friend of ours was a special education teacher. She explained that most young children’s books had reading level ratings (that go by grade level). She brought a pile of books to our home, had Bria read through them, and determine which ones were reading-level appropriate. (It turned out that Bria was already close to the average reading level for her age.) Bria read from these books daily and learned to read well enough to read on her own after a few months.

With the less fun part out of the way, reading comprehension would not develop as it did for her brother (with the challenge of the Warhammer manual), but from recreational reading and her participation in an online Harry Potter fan forum. For a while, homeschooling had returned to her and my comfort zone.

Now I need no theories

What did I learn from the learning-to-read experience? I learned to shelve my preconceived notions and respond to the individual needs and learning styles of each of our children. Yeah, right. Nah, I had to learn that over and over.


[1] Adam and Bria’s names used with their permission.
[2] Today, current science would say that the learning modalities theory (visual, auditory, kinetic) is to learning preferences as astrology is to astronomy.

Gary Bloom is a parent of two grown unschoolers. He is a semi-retired marriage counselor, writer, and home-roasting coffee fanatic.