Our Family Gap Year, An Origin Story
My 2 year old lasted two weeks in preschool. The experience drove us into the arms of full time travel, but more than that, unschooling. 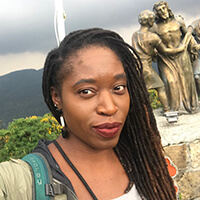 Freedom sounds like my youngest daughter’s voice singing to the tide. She is notoriously loud. Calling ships to the wharf loud. My mother says that that is what her mother told her. “I gwan put ya pon de wharf fi call di boats!” This anecdote is comforting. My daughter can’t help it; her volume is passed down. “She got it honest,” as they say where my family originated. (Which is not so far, after many migrations, from where we are playing now.) Since we’ve arrived in this little coastal town I noticed that I haven’t had to shush her. She doesn’t scream here to be heard. She yields to the sea.

What must it do to someone to be told constantly and in mid-thought, that you are too loud, too much, and taking up too much space? If we still, loving and gentle as we can, even under the most stressful of circumstances — other diners, guests, clients, or neighbours looking on — still manage to pierce her sensitive heart, what happens to her in the care of others? Well-meaning perhaps, but whose primary job is to establish order, and fit every child into it? For whom quiet is necessary to establish that order?

Our first and last parent-teacher conference came during Toni’s second week of daycare. I’d suggested we let her voice her resistance to going on the morning circle without me. It took only a minute, five on a difficult day, and she’d say, “I go to my circle time now, mama, bye.”. The alternative was forcefully removing her from my arms, kicking and screaming. This minute, to exercise a free will that had consistently ended in her choosing, peacefully, to go where they wanted her anyway, signaled to her caregivers that she “would never learn that she couldn’t just do whatever she wants.”

She was learning that her choices were valid, and that no one had the right to take them from her just because they were bigger, stronger.

“Of course everyone is an individual but generalisations help us get everyone on the same page, and sometimes they are all we’ve got to go on,” one teacher said. There were four teachers in that meeting nodding in agreement. Besides, some of the other children were taken kicking and screaming. Look at them. They come quietly now.

From my perspective, in her resistance she was learning about consent, and that her body was her own. She was learning that her choices were valid, and that no one had the right to take them from her just because they were bigger, stronger, had the corner office, or a superior title, and so on and so forth. Can we trust that if she didn’t learn the right to bodily autonomy now, she’d learn it later? Is learning to sit in a circle and walk in a line when told, more important? Couldn’t she learn *that* later?

Sure, I could have found her a preschool with a more “gentle” approach, but there is nothing simple about finding childcare where we live. Add in a culture obsessed with uniformity and procedure, and honouring bodily autonomy over obedience becomes even more difficult than I believe it should be.

None of us can “do whatever we want” without consequences. We are only now beginning to assess the damage done to our planet — not to mention one another — by Western thought and practices which dictate that as a species, our dominance is a given. It is not.

These dualisms stack to create the social, economic, and political systems that are projected to lead to our demise.

I’m greatly influenced by Dr. Kelly Henderson’s work on human contingence. As she puts it, “the Western model of education, which is based on the European Enlightenment era’s episteme, understands both humans and the natural world as dominable and separate things, [and our education is] based on a way of thought that erroneously understands humans as beings we are not — as eternally growing and never dying, as potentially omnipotent despite our fallibility, as subject to no boundaries other than the ones we place on ourselves.”

This imagined omnipotence is the foundation on which we humans erect the boundaries and hierarchies of our human family. Man over woman. Rich over poor. Adult over child. White over everything. These dualisms stack to create the social, economic, and political systems that are projected to lead to our demise.

Mother Earth may soon teach us, even with all our knowledge and technologies, that she can indeed go on without us and our ever-unfolding expressions of superiority.

So for now, my girl yields to the sea– knows she’s bigger than an ant, but smaller than the crocodile we saw yesterday. The mountains dwarf and awe her. The woods keep secrets from her. And that is her place for now. How strange that the word we often use for coming to nature means to vacate, not connect. My wish for this year is that we can begin to unpack these layers of human-domination-over-everything by our proximity to nature, and our immersion into ways of thinking and being perhaps more sustainable than our “own”.

“Your daughters,” said a local woman passing me on the sand one day. “They are at home in the sea. Look at how happy they are.” Yes. Singing with the waves. There’s plenty of time, should they need it, to learn to talk low, sit in a circle, and walk in a line.