Voices of Children
The Story of the Fifteenth Street School 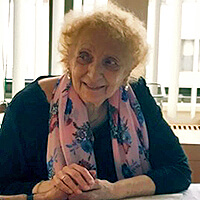 Rachel and Wilbur Rippy help found the Fifteenth Street School in 1964, the first Summerhill inspired school in New York City. Eventually, they joined the faculty at the Bank Street College of Education and retired in 1986.

The following is an excerpt from Rachel and her late husband Wilbur Rippy’s book, Voices of Children: The Story of the Fifteenth Street School, that came out this past week. It is available for purchase here. The profits from the book will go to ASDE. Rachel writes to us,

The movement for self-directed learning has a long history and, at this time, is growing and gathering momentum. ASDE provides leadership and a strong support to individuals and groups working to establish rational structures for living and learning in today’s complex world. I will be glad to contribute any profits from my book Voices of Children to its efforts.

ASDE wishes to thank Rachel for her generosity and our supporters for considering buying a copy of her excellent book!

In September 1964, the first Summerhill inspired school in New York City opened its doors to twenty-eight boys and girls, aged four to six. Everyone was excited and apprehensive as the staff welcomed the families to the four-story building we had turned into a school.

With my husband Wilbur and me, they explored the freshly painted rooms facing the street and leafy backyards of New York City’s Chelsea area and examined the blocks, puzzles, and math and reading materials we had assembled. We relaxed, as all seemed to fall into place, and we talked and laughed getting acquainted. After a while, the parents left, confident that their children would be cared for. By three p.m., going home time, most everyone looked forward to returning the next day.

During our next four years at the school, Wilbur collected the children’s stories and artworks and recorded his observations and comments about the events that unfolded there. When he died in 2006, he left drafts for a book he hoped to publish, and, continuing our long-standing collaboration, I undertook to complete the task as the co-narrator of our story.

According to Wilbur, “Children are creatures of movement and activity, of observation, of inquiry, of social connection, who seek the skill, understanding and competency needed in the social world they inhabit. The free school is brought into being by adults and children. The Fifteenth Street School will be a place where children find resources to create the images of their world and develop their creative, literary and thinking skills through the arts and their use of pretend, from its earliest forms of house-play to staged dramatic presentations.”

I have wondered if this small, privately funded, independent school with a privileged student body has any relevance to our time. Does anything that occurred there apply to our competitive world of high stakes testing or to the many children around the world forced into servitude and hard labor?

In a free society, schools such as this serve as laboratories for new ideas. And presently, researchers in early brain development corroborate the idea that play, open-ended inquiry, and social interaction are crucial in developing the neural structures children need to absorb and process information and engage in critical thinking. The children’s expressions of goodwill at the Fifteenth Street School in the 1960s, and their quest to discover and create, represent universal experiences and values. Thus, as those children’s voices come vividly to life again in the following pages, they are as relevant and important today as they were five decades ago.

Wilbur wrote about a child’s observation:

In one corner, near the window, a child is lying on a blanket reading a book. Another looks up from the table where she has been working on a filing system for the class library and says: “This is like a city. Over here is a library, over there the newspaper. Rachel is sewing with the kids and Laura and Darby are painting. Look! This is a real city!”

While conventional schools have been compared to factories that Lewis Mumford called the “mega-time machines of society” in which each unit (child or adult) is reduced to a replaceable part, the child’s metaphor of the city for school conjures a radically different setting. Of course, we were gratified to hear this analogy for what we were hoping to achieve: a democratic environment where citizens are free to partake in and create an array of meaningful activities in a safe atmosphere. In an ideal city, its citizens can stroll through streets and parks, work and eat, attend lectures, concerts and classes, read quietly in the library, and interact with a variety of people.

At our school, the children explored a variety of settings and face-to-face contacts both inside and outside the building. Inside, they roamed, imagined, built, and created in an extensive domain of rooms, people, animals, books, and materials. They could go from room to room, visit friends, ask questions, interact informally with others, and form their own groups, as well as work independently or attend the organized activities. The children connected with a variety of personalities: their teachers and student teachers, volunteers, Margaret the secretary, and her dogs, as well as Orson and Ralph, the young man who came to clean and talked about sports and his travels.

Outside, they met with Hi and Mel in their luncheonette, the workers in Butler’s Lumber Yard, and with shopkeepers, dockworkers, and firemen on our neighborhood walks and trips around the city. All these provided models of people at work and offered insights into how they approached their daily tasks. The children were not only studying people doing their jobs, they were involved with them in a mutual exchange of ideas. While gaining respect for others, their self-esteem was enhanced by seeing themselves as contributors to this extended school community to which they belonged.

This feeling of life involvement, of relatedness, is what counts. The activities were not there to entertain the children or to seduce them into learning. They were there because the children were interested and became involved in the skills and work functions of the society, because they met the children’s need for rational expression of their dynamic drive toward competency and growth.

In order to be free, people in a city need to feel safe and protected by rules for traffic and codes for building and conduct. The school met health, safety and certification requirements, but we had no written documents pertaining to conduct. Unlike Summerhill and Sudbury Valley Schools, where the self-governing bodies had developed written codes for regulating and enforcing the social contract, we did not. We spoke about rules at various times and relied on shared assumptions, consensus and discussions. Over time, we developed concepts for guiding behavior that everyone agreed on, and the children created their own guides. (See chapter 5: Social Studies).

And just as in a city the public participates in creating its libraries, theaters, newspapers and rules of behavior, the children took part in creating the school. They developed their presses and publications, library, museums, music and drama groups, TV and radio stations.

The Fifteenth Street School constituted a network for facilitating formal and informal learning. It was a lively environment where children made decisions about their pursuits, expanded their social skills and acquired self-discipline in making choices, Yes, in many respects, the school was “a real city for living and learning.

I regard the record of the children at the Fifteenth Street School, working, playing, interacting for long periods of time without adult supervision, as the most salient demonstration of their capacity to regulate their own behavior.

The children’s demeanor is impossible to convey by words.

The expressions of joy, exuberance and intensity in their faces and body language are palpable in photographs that reveal the children’s vibrant engagement with the multidimensional world of relationships and things, with the materials to be formed, transformed.

Rachel and Wilbur Rippy help found the Fifteenth Street School in 1964, the first Summerhill inspired school in New York City. Eventually, they joined the faculty at the Bank Street College of Education and retired in 1986.