illustration by Alexander Khost
Español English
Part I: Navigating from conventional schooling to the brilliant shores of SDE?
Transitioning into Full Autonomy. Authority in Self-Directed Education. 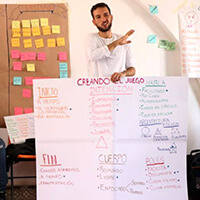 “With all this freedom, sometimes I miss someone telling me what to do”.

One of the persons with whom I work (close to turning 10) shares with me, in a beautiful mixture of struggle and integrity, her doubts while transiting from an orthodox “education” model into a Self-Directed Education one.

She gifts me with her mastery of articulation and emotions, and shares with me a gem: the dignity she uses to deepen into her inner ecosystem to make sense of her recent discoveries. Diving into this new form of learning and relating to herself rippled into other areas of her life.

“I listen more to myself, and because of that, sometimes I ignore other people”. A capacity with the potentiality to become a diamond, but that will remain carbon if not refined. She feels disappointed because it happens at home too.

By design, orthodox “education” systems promote the image of Authority as an entity external and alienated from the individual, and the ultimate and centralized container of power. In this apparently natural dynamic, we find the underpinning of the separation between the Being and the Doing.

Desires, intentions, emotions, rhythms, will, all the complexity that would nourish a healthy process of learning, gets purposefully oppressed. The medium becomes the message: before learning any of the subjects, in immediate cognitive apprehension, by context and culture, people learn to obey whoever holds power, always different from him or herself. This derives from the modeling of docile individuals when facing explicit or anonymous forms of authority. In the first form we can easily identify the source of control (a person, law, an institution), in the latter we see the bullet, the corp but not the shooting gun; disguised as scientific doxa, mainstream public opinion, beliefs and other cultural memes. Even though we can rationally trace back its sources and understand them, in the collective mind it remains rarely questioned, often assumed as true.

Desires, intentions, emotions, rhythms, will, all the complexity that would nourish a healthy process of learning, gets purposefully oppressed.

A system based on Pyramidal Collective Intelligence (current society and its institutions, including schools), for its survival, leaves out spontaneity, agility and unpredictability of those who conform it. Mineralized from the rigidity of its structure.

This form of authority shares in its roots the psychological foundations of sadism: the obtainment of power (and pleasure) born in the exercise of domination and oppression. And while these entities, materially, present a stronger force in comparison to the individual (and often collective) capacities to respond effectively to it (which usually impresses and intimidates), it germinates from weakness. It needs to possess, to dominate in order to subsist, without the dominated other it dies, hence dependent and weak.

Another of the natural consequences of this form of authority: fostering a culture of pleasing. Only this entity can authorize the value granted to the action of each person, through arbitrary and standardized metrics, to avoid diversity. In its sea of abstract forms of measurement and evaluation, it provokes the perspective of the Other as reference and instrument of measuring my own value, through comparison, triggering competition, apex of separation, and foundation of every war.

The individual pleases this entity that acknowledges and values him (rooted desires) if she plays by its terms and conditions. Regardless of him becoming distant to his self-discovery, knowledge and Love. Even in the most successful individuals (according to the morals in turn) this has disastrous outcomes.

Life, not anymore as a script, but as a blank paper may seem scary. Recognizing ourselves as the source of creative power, and simultaneously of responsibility for our creations can overwhelm us. Crystallizing the marriage between Being and Doing, in full embrace of our complexity, to operate from there takes time, trust and patience.

When she tells me “with all this freedom, sometimes I miss someone telling me what to do” in the subtext I read a call to re-signifying Power as Potency, as Capacity, of creating our own journey, our life in communion and our life in solitude. I read a reward and punishment based education and the notion of obligation to please in order to feel seen and valued threatening the opportunity to tap into Unconditional Love for the process, for the action in itself and for the creator self. I see the magical discomfort inherent to any transformation.

Life, not anymore as a script, but as a blank paper may seem scary. Recognizing ourselves as the source of creative power, and simultaneously of responsibility for our creations can overwhelm us.

I venture to say that something similar happens to those who decide to commit to the world of Self Direction. In the desert where we stand after detaching (or beginning to) ourselves from the oppressor-oppressed dichotomy, we try to build (to find?) our oasis. And we face the ruins, heavy rocks, of those days of blindness. Emotional, physical and chemical addictions, old patterns of the ego, masks almost sewn to our faces. Sometimes we would like to crumple the blank paper, and throw it to the closest existential abyss, ask for a script, and bring the “comfort of the follower” back.

We can’t evolve past the linguistic container that holds our reality. We speak the world into existence. By healing the concept of authority we can find a harmonious relationship with it, a relationship that invites the Embodiment of its original meaning: augment, promote, enhance progress. And by doing so, creating a gradient to transit towards our freedom, as opposed to having a hurtful separation from the old paradigm.

Inside our Self-Directed Education spaces, we strive for the learner to recognize and live his autonomy and the responsibility of exercising it inside a collective.

Inside our Self-Directed Education spaces, we strive for the learner to recognize and live his autonomy and the responsibility of exercising it inside a collective. Persons and the whole, through tools for composability (tools to design and create other tools, architectures, methodologies, etc.) gain resilience and dexterity to delineate and implement the adequate process to achieve their intentions. Sometimes this means having an external authority in our space, acknowledge as such because of its hierarchy based on experience. E.g, if someone wants to learn Japanese and decides to have a formal teacher and classes to fulfill that desire, she will create an interpersonal relationship of superiority-inferiority of Knowledge and surrender to the leadership of the teacher. External, rational and non-inhibitory authority.

In this case, the teacher (external authority) and the learner, share the same intention. If the teacher achieves his disciple’s development, he will feel satisfied. On the opposite case, both will share a sense of incompleteness.

When this experience finishes, the learner comes back to a context where she keeps deciding what configuration serves better for her evolution. Conscious systole and diastole.

If throughout our facilitation, we achieve to incorporate authority as a format of service to the learners’ evolution, chosen in mindfulness, after identifying it as the ideal way to go in an specific moment and context and not as a reaction to the notion of incapacity to create one’s order, regulation and/or find our inspiration to act, then we would have taken a transcendent step toward true autonomy.